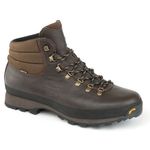 my zamberlan trek lite boots have finally worn out,had them for 16 years,done quite a few thousand miles,hang-glinding,paragliding,bit of climbing & used them on my motorbike,perfect boot waterproof & feel like i have slippers on,hope the next pair will be the same but knowing zamberlan they will.
ken williams, Birmingham
In my review I complained that after 8 months my Trail Lite's let in water; Zamberlan emailed me and asked me to return the boots, 12 days later I had new boots. Many thanks Zamberlan.
Jeff, Kings Lynn
Had a pair of Trail Lite boots which lasted 4 plus years until the soles wore out, so stayed with Zamberlan Trail Lite and the next pair let in water after only 8 months. Will be giving Brasher go.
Jeff, Kings Lynn
I walk more than 3,000 miles annually and have tried and worn-out many boots and shoes oven the years. I can confidently say that I have never owned a better pair of boots than these Zamberlan's. The upper is best quality leather and much of it is a single piece, so there are no seams around the tongue where leaking could occur. The sole is a thick, grippy Vibram, but with a little more give in it than earlier models of Zamberlan's, to allow for easier flexing. Ankle support is good but, here too, there is a little bit more compromise compared to earlier models and the boots are consequently more comfortable to use. The boots are completely waterproof. You need to be careful about sizing. Zamberlan make their boots on a narrow last and a number of walkers have noted that they need a larger size than usual. I had to exchange my original purchase pair at European size 43 for a size 44, and then the fit was perfect - snug enough to keep the foot well supported but roomy enough for comfort. In summary, I rate these Zamberlan's as pretty much the perfect boots. It is impossible to over praise them.
Jerry Jopson, Dorset